This is the Meaning of High Five Emoji on Whatsapp 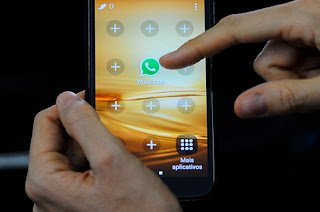 Metodiusgetan - Hi, how are you, friend? Hopefully all of us stay healthy and be given good luck, Amen. As time goes by, guys, we are definitely using the popular instant messaging application, if it is pulled back, first from manual mailing sent via post, then there is a messaging application like BBM, until Whatsapp appears, making everyone's interactions easier.

In the past, the makers of this instant messaging application only published or made emoticons a little, because in my opinion the emoticon is really needed to strengthen arguments in chatting or sending instant messages on BBM or Whatsapp. Try if you only write words without emoticons, maybe we won't know the answer to our speech is what the expression is like.

Now whatsapp application has a lot of users, anyone who has a smartphone will download it (not all depends on the needs only). Now it is busy about emojis or emoticons that are wrongly interpreted by our society, namely the society +62 aka Indonesia. So, what does high five emoji mean? let's discuss in the following article. But before going there, my friend personally interpreted the image of the hand to meet what it was like? Answer in the comments column ... Let's look at the following high five emoji meanings.

If you send an apologetic message, as a matter of thanks, maybe you often use emoticons or emojis, right?

Actually, for the meaning of the form of hand emoji meeting, it can be interpreted as bergam, but the culture of hands meeting as shown above is basically an expression of expressing agreement, in Indonesian terms it is like "high-fives", not expressing apologies, giving congratulations or anything else that ends more polite thing.