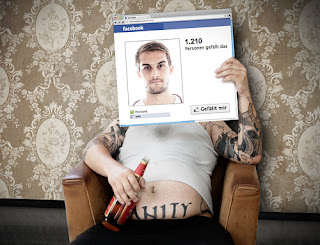 Many people complain, why is his friend A or B always showing off their material or achievements on Facebook? They should be more tolerant! It's not good to be arrogant, show off, while many still lacking compared to them.

Many people who were initially happy because they met old friends on Facebook eventually became depressed. Witnessed posts by posts of friends who seemed to insinuate her lack.

The single, feeling depressed because it was as if his friend continued to show off the happiness of his marriage. Those who don't have children cry because their Facebook friends seem to keep showing off their babies. Those who have not had much achievement feel upset because their friends show off their possessions and achievements. Or there are also those who feel bored because what appears on the timeline is that post only.

Though everything that appears on Facebook, almost always is a reflection of our activities while using the internet. The Facebook algorithm will learn all of our activities in AND outside of Facebook, then it will display posts that are considered to be appropriate for the activity. This algorithm does not realize that sometimes doing an activity does not mean we then like the activity.

Of course, Facebook will not open up in detail how their algorithms work, because all advertisers, buzzers, bots will use this algorithm to pump their posts ranking. But broadly speaking, the following activities will prove that you are also responsible for what continues to appear on your timeline.

Many people like to be angry when I suggest Unfollow even block people they don't like posting. I understand that blocking is not an easy choice for many people, because breaking up on Facebook can mean breaking ties in the real world. It can even cause hostility.

But annoying posts won't appear if you don't follow that person. You can still visit and comment on her page once in a while when you feel in the mood, so they don't realize you've unfollowed her.

2. You interact with their posts.

Well, you decide to keep following them for various reasons. Then, do you comment on their posts? Or at least give 'likes'?

Clicking on likes or comments stale will cause the algorithm to think you want people to post, which you really don't like, increases its priority on your timeline. The algorithm is like an honest robot, where might they know you are actually just pretending to like it?

For example when you congratulate a friend, because they have achieved a certain achievement, or are celebrating their wedding anniversary, then all posts related to their marriage will get priority on your timeline. Even though maybe you just click likes to make small talk.

Therefore you must be honest. If you don't like it, just let it go. Even use the 'hide post' alias to hide the post. So that similar posts will not appear on your timeline. Thus ranking their posts will decrease in your timeline and other posts that you might like to go up.

At the same time, your friends also thought that you really enjoyed their posts, so they were excited to display similar posts. Where did he know that people were actually upset while the number of likes and comments reached hundreds?

3. You interact with posts with similar themes

The Facebook algorithm is currently unable to distinguish between positive and negative reactions in a post, so all reactions related to one type of post result in all posts with the same theme going up.

For example, there are people who have difficulty having a baby, then he commented on a post about people who also experience the same difficulties, then the baby keyword causes everything related to the baby to appear on your timeline. Like their post celebrating her baby's first birthday, posting the birth of a baby includes a mutual friend post that shows photos of their baby. Also advertisements for products related to babies. Etc.

So that person who is depressed because they don't have children will feel very insinuated because they are bombarded with posts about people who are happy with their babies.

Even your activity on the Internet is suspected to be a reference to the Facebook Algorithm. For example, you often read articles about traveling or watching certain travel videos on websites outside of Facebook, so posting friends who are traveling will more often appear on your timeline, making you annoyed and jealous if you don't have the money or time to travel.

4. You join a certain group Group

member posts where you join will obviously get priority because it is considered the thing that interests you most. Unless you accidentally turn off notifications from the group.

In addition, the theme of the group will provoke posts and advertisements that are similar to the theme.

For example, I joined the Community of Single People. This community, even though there is a single word, is not a place to find a mate. This is a community for people who feel happy and proud to be single. Most members of this community do not want to get married.

But the Single keyword, causing those who are considered Algorithms to be single and looking for a mate will increase their posts on my timeline. Also various advertisements regarding applications and search match websites, everything that is considered an algorithm is something that a single person needs. Including articles about marriage. Wedding photos and wedding anniversary of people.

For ads, it can be set so that certain ads do not appear. But the fact will still appear too ... * sigh

5. You and your friends often share the same link

For example, you are a supporter of Jokowi, and your friend is a supporter of Prabowo. But you two often share the same article, for example, certain news links about Jokowi. Then your friend will increase his priority in your social circle and all of his posts will appear first on your timeline.

Which means you are likely to fight with him in various posts due to a different support. Which then instead by the Facebook Algorithm is considered a sign that you are both close friends. Because it often interacts.

This is compounded by the halt facebook algorithm, where posts are postponed appearing until when you log in. So as if he was intentionally waiting for you when posting that annoying thing.

So the attitude that is considered showing off on Facebook, may be the result of your own activities so that posts appear as if showing off your suffering. Until the Facebook team gets a better algorithm formula, then what can we do, that's the reality we have to accept.

Of course, there are people who may have personal grudges with you, so deliberately showing off to hurt you. Maybe it's precise because you feel jealous of yourself or pure because he's a psychopath. But I think psychopaths like this are rare.

One thing that must be understood: You cannot fully control other people, you can only control yourself. You can advise people not to show off, but can't force him or him to get angry if he doesn't want to. Instead, you can force yourself not to see their posts.

But if it's true that Facebook hurts you, or boring you with just that post, then you can just reduce or leave Facebook, temporarily or forever. Switch to other platforms whose algorithms are more suitable to your taste.