-->
Home TRAVELING Enjoying the beauty of Melbourne and Canberra

Enjoying the beauty of Melbourne and Canberra 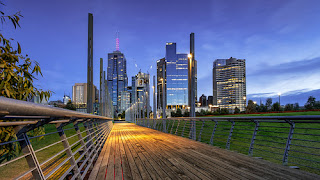 I had the second chance of the City in April 2019 then and watched a good city arrangement, a city park, good sidewalks, good roads, adequate public facilities, so as not to dull and create beauty.

Melbourne is the capital of Viktoria, Australia, as we know that Australia consists of states. The city, based on the assessment of the global liveability index of the Economist Intelligence Unit (EIU), is the world's first most decent livable city and the title is pinned to Melbourne for 7 consecutive times.

Melbourne, with the scope of assessment, among others, the availability of infrastructure, security, health, education, culture and environment, although then in 2018 the first position was occupied by the City of Vienna, Austria and Melbourne shifted to second place, but this city was always a Champion and very comfortable tourist spot.

A few days in Melbourne, I saw that the city was actually quite busy, but the atmosphere remained calm and orderly. Interestingly, even though Melbourne is busy, the city does have good governance, the pedestrians for pedestrians are neat and clean. City tram is free for the city and a beautiful tall building, and transportation is adequate.

For Transportation, Melbourne has Trams, Train and Buses for the public. We can go around the city with a free tram. The tram stops for 1 minute at each stop, but there is no need to chase up, because the next tram will pass 10 minutes later. Trams in Melbourne are the largest tram network in the world and this tram is very easy, because besides being free, it is also connected to the bus terminal and Train.

Melbourne in many ways occupying a rating is a beautiful place and is ranked top in the world, in terms of beauty, livability and public facilities. there are also many places to eat here and it is quite easy to find food that fits the Indonesian tongue or halal food

Canberra is the capital of Australia or known as the ACT (Australia Capital Territory). This city is neat and orderly. As the capital and center of Government, the streets are not crowded. Every morning people walk more or ride bicycles to work or to activities.

Incidentally, I went to Canberra in the early fall, the temperature was irregular, the morning and evening were very cold around 5-7 degrees accompanied by wind. During the day the weather is pretty good up to 15 to 20 degrees. So every evening people will hurry home, because of the weather drop and strong winds and drizzling rain. make shivering.

The average office closes at 4 or 5pm and the coffee malls or nongkorong places also close around 5pm. Very rarely until night, in general people in Canberra at night spend more time at home.

I just realized, it was very different from life in Jakarta, which until late at night there were still many jobs in the Office, even traffic jams until 12pm were not surprising conditions in Jakarta.

in Canberra, public facilities are very adequate, large roads with sidewalks that are convenient for pedestrians, crossing roads in Canberra is quite easy, by pressing the red button on the crossing lights. The capital's streets are also decorated with various parks supporting the beauty of the city and the trees that have reportedly been planted since hundreds of years ago.

That's a bit of my story about the beauty of the city of Canberra as the Capital of Australia, and Melbourne as the most comfortable city in the world.

Hopefully the capital of Indonesia will be more beautiful in the future ............

So the story of my trip to Canberra City and Melbourne Australia. Hopefully foreign tourists who come to Indonesia also find a wonderful experience to be told in their respective countries.