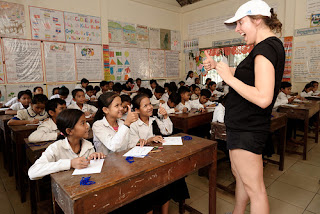 Icah always stuck behind her since leaving home. His heart is pounding. During his absence, his schoolmates were still close to him. There are Khanza, Riu, Fariz, Ajam, and others.

Only Fatun lives outside the housing complex. The eight-month-old boy from Icah was stocky. He likes to pull Icah's hair which is pulled by a horse. Fortunately, now they are separated. Icah can't be bothered anymore. But will there be no bullies later?

If you want to go to the new school, after walking to the gate of the housing complex, he and his mother must take a motorized rickshaw.

Hmm, soon he will meet with a very foreign atmosphere. Actually, he didn't want to enroll in the new school. Even though there is a mother next to him. But if he finds out, he can be advised extensively.

From waking up, Icah was already furious. The bath is long, breakfast is longer. Rice is only muted. He hopes for sudden fever, and there is no more business registering for school today. But the long-awaited fever didn't come.

Icah wants to cry. He just bowed when he and his mother were waiting for a motorized rickshaw at the gate of the housing complex. Because of daydreaming, she was almost left by her mother. The mother has climbed onto a motorized rickshaw. He is still busy biting his nails.

"We want to register for school, Icah. No need to fuss!"

"But there are foreign children. Some are big-bodied. Some are naughty. Some will eat you. Is that so?" Mother stroked Icah's head. "Icah is big, must be brave! Cook a coward boy like this."

Icah smiled sheepishly. His heart is a little calm. When the motorized rickshaw stops in front of a school, Icah returns to fear. The mother's tail grows back. Several times she brushed Icah's hand against her skirt, but like a mosquito, she alighted again.

Icah trembled to see almost the average child gathered on the schoolyard, no one she knew. They pay attention to Icah. They whispered while pointing at the child's nose. His nose is different from the others, sharp and slightly pointed.

"Wait a minute, mother. In class first, meet the teacher."

Mother didn't hear it. Icah's body is tense. He sat on the school terrace. His legs are paralyzed. His clothes were wet with cold sweat.

"Hi!" greet someone. Icah raised her face softly. There was a fat man, with a black face and uneven teeth, sitting while grinning at the horse next to him. Will he eat Icah? MOTHER, your child will be gone forever. The kid's horse grin widened. Icah looked down while closing her eyes.

"Want?" asked the boy softly. Icah opened her eyes slightly. In the child's hand were two chocolate bars. Without hearing Icah's answer, a bar of chocolate immediately changed hands. "My name is Bingo. A new student too. I won't eat you, really." He laughed crisply. Bingo is very funny. Slowly Icah can laugh and forget her fears. After spending each chocolate, they play hide and seek, chase, and play airplane.

The mother calls Icah. He arrived and was asked by the teacher. He smoothly answered.

"Hopefully the mother's child will be accepted." The teacher greeted Mother and Icah. They leave class. Mother called a motorized rickshaw.

"Later after the announcement."

They ride on motorized rickshaws. Bingo is still playing chases with other children. He waved towards Icah. Duh, how long is Icah going to go to school?