At least 14 people were killed and dozens were injured by mortar fire at a market in northern Afghanistan.

An Afghan army spokesman, Hanif Rezaee, said on Saturday (6/7) that the Taliban were responsible for the attack. The attack took place at the Khwaja Sabz Posh district market, Faryab province on Friday morning. 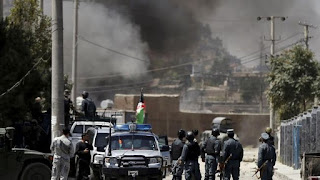 "Fourteen civilians were killed and 40 others, including women and children, were injured," Rezaee said.

He said the Taliban were trying to reach an army checkpoint near the market.

Even so, there have been no claims from the rebel group.

Name Muslim, Faryab's director of public health, said 14 bodies and 39 injured people including four children had been taken to the local hospital.

Several victims with critical injuries were flown to a hospital in Mazar-i-Sharif in Balkh Province.

The deadly incident comes amid a war between the Taliban and Afghan security forces raging, even as Taliban officials met with US negotiators in Doha in an effort to end the conflict.

Next Sunday, the rebels will meet with various representatives of Afghan society in Qatar as part of a potential peace process.